Since June 2005, I’ve been collecting tracklog data using my (then) Garmin GPS 60 (CSx). This means that every time I go cycle racing, walking, sailing, ice skating or even flying, I bring my Garmin, turn it on and (automatically) log the track.

After the track is completed for that activity, I archive it at home, as a GPX file, using Garmin’s MapSource. I initially bought the GPS for tracklogging and navigational purposes for my bike trip from Arnhem (Netherlands) to Paris, but keeping all tracklogs did give me some other cool opportunity that I didn’t think of back then. One example of that is gathering statistics about my cycleracing and mountainbiking trips, thereby motivating me to break new records and discover new terrain. Another cool purpose for all my tracklogs, and what this blog is about, is that I can visualize them (all at once) on Google Earth!

With Google Earth and converting tools like GPSBabel at our disposal, it’s possible to create a (big) Google Earth file of all tracklogs combined. When I try to combine, for example, the activities for which I have the most tracklogs available (cycle racing, mountainbiking, walking, cycling on my hybrid bike and sailing), I assign them a color so I can differentiate between different types of activities and create really cool and insightful maps, like this: 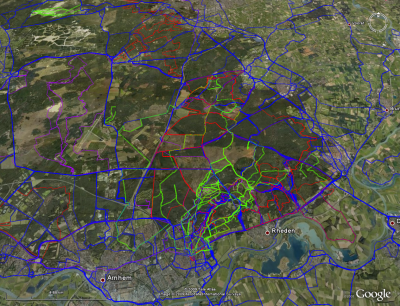 In this picture, the red colored line stands for mountainbiking, purple stands for cycling with my hybrid bike, blue is used for cycle racing and green is for walking. If you look carefully, you can also guess where I must live somewhere 🙂

This map might look not very organized or useful to other people, but for me, there are many, many stories and new ideas hidden in it.

There are a lot of interesting views possible, seen my pretty large collection of tracklogs. This one for example is from my holiday last September in and around Cassis (south France): 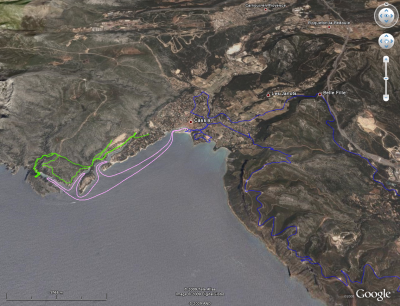 The pink line show a sailing trip we’ve taken. The green line shows the walk we took to Calanque d’En-vau and the blue line shows a cycle racing trip over the Route du Crête. If you ever want to visit this area, it’s a good thing idea to take my tracklogs, put them on your GPS and do the activities while you are in the area, so you don’t miss the ‘must-have-done’s’.

This whole thing looks somewhat like everytrail.com, where one can create some sort of “trackblog”, including photo’s that can be linked to the track. But an overview, loadable in Google Earth is not one of the options they offer (yet). But maybe they add it in the future, so, if you start uploading your tracks at everytrail.com now, an easy total view in Google Earth might not be so far away at all 🙂

Luckily you can create such a combined track yourself as well, however it requires some scripting knowledge. To combine the (GPX) files you can use gpsbabel, remove all but the track-information from the tracklog, for each of the tracklogs from a certain category, and output them to a kml or kmz file, a command that looks like this on unix:

After that I load each kml file in Google Earth separately and assign it a unique color. By moving the track to the same folder in Google Earth, I can combine them to one track, with multiple colors per category. That’s all it takes.

The most actual version of all my tracks in the categories cycleracing, ‘Cycleracing with hybrid bike’, sailing, mountainbiking, walking, ice skating and flying can be found in this automatically updated Kml file. 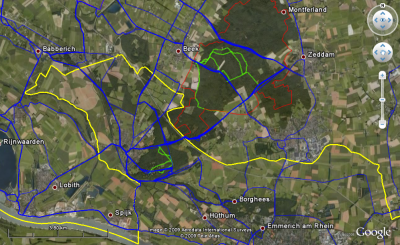 I hope I can inspire people to do the same, or at least motivate them to start collecting and archiving their own tracklogs, so at some point, they can create some cool maps just like I did with my tracklogs, and who knows, maybe start comparing those tracks.

The latest combined tracks file (automatically updated) with all my tracklogs is available here.